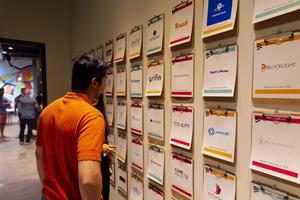 “The vision of Embarc Collective is to co-locate startups within a state-of-the-art facility and with access to top-rated individualized support to accelerate the rate of growth of our tech community,” said Lakshmi Shenoy, CEO of Embarc Collective. “Reaching this tremendous milestone, sooner than we had projected, demonstrates that Embarc Collective is officially a premier destination for tech entrepreneurs in Florida, and one of the most effective support models for startups looking to truly take their companies to the next level.”

Embarc Collective’s members celebrated several milestones of their own this year.

The stock-investing startup Grifin has been a member at Embarc Collective since its inception, and has been making waves in the personal investment industry ever since. In that time, they’ve seen Embarc Collective grow from a few members to a bustling ecosystem of startups.

“Embarc Collective is a family of just genuinely good human beings that are not only incredibly smart, but are working together to make the world a better place,” said Aaron Froug, co-founder and CEO of Grifin. “Embarc is a meaningful and positive addition to Tampa Bay and the Startup Ecosystem in general. The team at Embarc have built a repeatable process that should be represented around the country. I’d recommend it for any startup. Embarc creates an environment that facilitates growth, well-being, inclusivity, and belonging.”

In addition to local startups, Embarc Collective is seeing a surge in interest from transplants who relocated to Florida amid the shift to pandemic-era remote work, including JetBridge and TrustLayer. Both moved from Silicon Valley, the startup capital of the world. Attracted by the centralized community and strong support Embarc Collective offers, including burnout prevention coaching, a venture capital database, an in-house talent acquisition specialist, and a network of over 100 partners across the country, the two companies now use Embarc Collective as their company headquarters.

Tampa Bay as a region continues to attract startups and technology companies, welcoming tech executives like HelloFresh co-founder Daniel Treiman, Wag! co-founder Brendan Rogers, and Fast co-founder Domm Holland. Real estate brokerage CBRE ranked Tampa ahead of all other cities in Florida – including Miami – for new tech job openings last year. In April, the Times of Entrepreneurship named Tampa as the #8 Best City to Start a Business In After the Pandemic.

Embarc Collective works with a growing roster of 100 early-stage startups at its 32,000 square-foot office in downtown Tampa. Its partners include over 100 expertise-focused organizations and 160 early-stage venture firms across the country dedicated to assisting entrepreneurs. In 2020, Embarc Collective delivered 1,300 hours of one-on-one coaching to its members as well as 65 group learning sessions.